Skip to content
May 20, 2022
Blockchain News / Crypto News / crypto updates / Cryptocurrency / database / ledger database / qldb / quantum ledger / web services
When AWS or the Amazon Web Services released, Amazon was far from behind to use Blockchain. For the starters, AWS is a platform that Amazon provides and it is an amalgamation of different things put together to make itself: an ‘evolving cloud computing’.

A Different Take with Amazon Quantum Ledger Database
However, Amazon could not be left in the league of Blockchain kind of technique as it has taken the world by storm while easing out many problems that organizations face. With Amazon Quantum Ledger Database aka QLDB launching today, Amazon has finally got itself a completely managed ledger database! 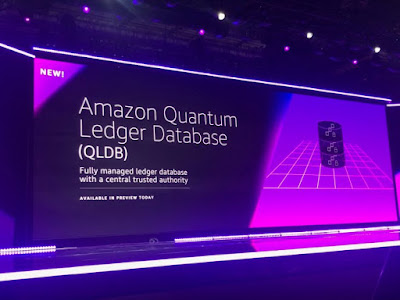 QLDB tends to execute many transactions at the same time thus making over all process an easier one. An individual shall witness transparent nature, easy to use and speed as its most important aspects whilst there is also going to be automatic ‘scale up and down feature’. Users will be able to make use of it at any time they wish to.
Another feature that has caught the attention of people is the simple fact that this new ledger database has been designed in order to have transactions verifiable in a cryptographic manner. To ensure that everything is managed appropriately there is a central trusted authority to look after all portions.
Managed Blockchain Service by Amazon
This turns out to be another service which Amazon has announced along with the quantum ledger database. QLDB is going to be in fast track mode apart from having modifications done in cryptographical chained manner.
On the other hand, Amazon Web Services Managed Blockchain product is the piece that is going to be the one which is permitted to operate Quantum Ledger Database.

With ‘Amazon Managed Blockchain’, you witness a service that is going to allow set up besides managing of ‘scalable Blockchain network’. All of this is done in a matter of seconds with a few clicks.
Due to such a set-up, most of the applications that run behind numerous transactions would vanish in a jiffy thereby creating an automatized system. An automatic system is also responsible for tracking operational metrics and these can be either storage of resources or usage of either memory or compute’.
There is also an option of handling of certificates that was not possible up until now. Most importantly, a characteristic most liked is viewing trends and at the same time having a deep analysis of how the network activity is outside a given network!
Amazon has indeed gone a step further to bring in blockchain in to the picture but in a little different manner and it is yet to see how would this effect on the whole system. Reasons being with quantum ledger database by your side, there is an option of checking (read managing certificates) apart from the ability provided to invite new users to this network!
And so, Amazon has announced two path breaking techniques that may turn tables for good for the giant!